PayPal Links for ROBOTMAN Volumes 2 and 3

I bumbled on the keyboard and wiped out the sidebar we used to have here that offered quick links to all the digital comics collections offered here. As said in the sidebar, please contact Paul Tumey if you would like to purchase his two fine volumes of Jack Cole's MIDNIGHT comic-book series (and if you don't have them, you need them).

Here are the purchase links for ROBOTMAN Volumes 2 and 3. They're $2.99 USD each. See elsewhere on this blog for descriptions and images from these e-books, which have been purchased by many happy customers. 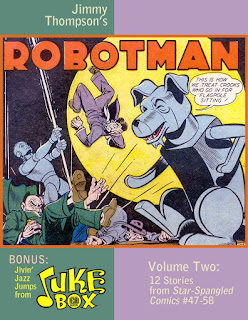 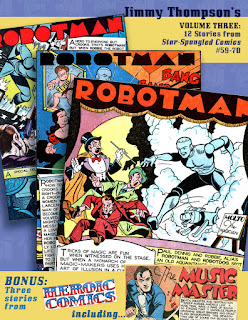 ROBOTMAN VOLUME THREE:
Posted by Funnybook Attic at 11:33 AM 2 comments: 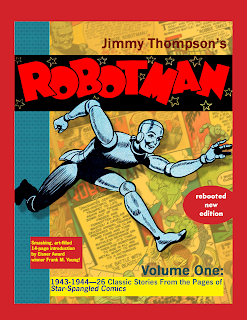 For years, I've meant to clean up the Frankenstein-monster that was ROBOTMAN Volume 1. After another period of dawdling, I've completed the task. And here it is, in a handsome new edition with a longer introduction--which makes use of information about Thompson's life and career which weren't available nearly a decade ago when the first edition was produced.

With the exception of one story, the book collects the first 26 episodes of this charming, graphically magnificent comic-book feature, which was created by Superman's Jerry Siegel. The strip really came to life when Canadian sports cartoonist (and documenter of Native American customs and lore) Jimmy Thompson took over the art helms in 1943.

Though Thompson didn't write the scripts, he put 110% into every panel on his elegantly designed pages--strong layouts, masterful cartoony comics art and creative use of typography (hand-written and mechanical). The results have been one of comics' secret classics, never reprinted save for one story and hard to see for decades. 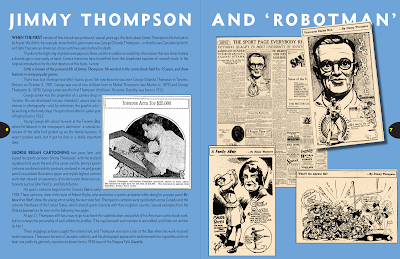 Here's the opening spread of the new introduction written by Eisner Award winner Frank M. Young. Following is the table of contents and two sample spreads. 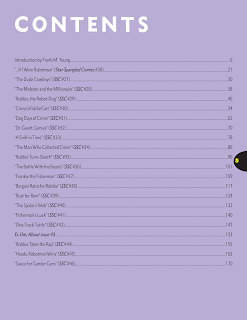 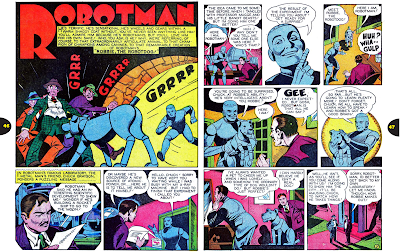 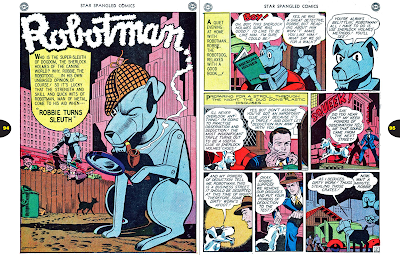 This 176-page e-book, in PDF form, has page after age of bright, colorful comics--restored from their original printed versions--and is pure reading bliss! The price is $6.99 USD. However, if you purchased the original edition and want to upgrade, you can do so for $2.99 USD--just answer the question to verify that you have the now-discontinued first version. (Pardon the telegram phrasing of the question--had to cram in into 30 characters.)

Use the handy PayPal payment buttons below and a link to download the book will be sent to you.