It's hard to believe that one month has passed since our last posting. It's our intention to post here more often than that. Suffice to say we've both been busier than normal with work. That's a good thing...
As you may have intuited from our prior post, not every outing here will focus on outrageous/disturbing material. There is plenty of that, in the history of comic books, and we will explore those darker byways when the mood strikes us. (That said, thanks to Art Spiegelman and John Benson, another pre-code Holocaust-themed horror story has surfaced. We will publish this one very soon.)
Today's post is the first in what I hope to be a series on one of the most starkly individual comic book artists: Dick Briefer. His reputation largely rests on the series of slapdash, spirited Frankenstein stories he wrote and drew in the latter half of the 1940s.

Briefer was among the pioneers of the American comic book. As imprints such as Fiction House, Fox Comics and Lev Gleason-Comic House debuted in a soon-to-be-saturated marketplace, Briefer's story and art was a strong presence. His artwork, circa 1939-1941, compares to Basil Wolverton's and, to a lesser degree, Fletcher Hanks'.

Like Hanks and Wolverton, Briefer seems to have written his own stories, and, in doing so, pursued narrative and visual paths of a distinct peculiarity. Briefer was the finest storyteller of the three. The quiddity of his comics work assimilated better into the mainstream, despite its obvious eccentricity.

Briefer's early work shows curiosity about what a comic-book story might be, and how it might unfold. There is plenty of pulp-genre blood-and-thunder in his pre-Frankenstein work, all delivered at a breathless clip, and all seemingly done quickly and enthusiastically. This was standard operating procedure for a 1939 comic book artist. While much of this early comic book work seems stiff and staid, Briefer's first efforts, while undeniably crude, leap off the page with a singular energy.

Here are some sample pages from Briefer's early stories: 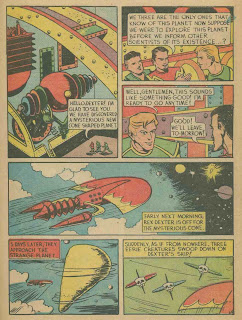 This page is from the third installment of his space-opera creation, "Rex Dexter of Mars," as published in Fox Comics' Mystery Men #3, 1939.

While its draftsmanship teeters between elegance and crudity, bold shapes fill his panels. The energetic sweep of his ink lines has intense eye appeal. As well, he begins to break up the standard 9 and 12-panel grid layouts of early comic books.

The "Dexter" series was notable for its main character's anti-hero status, even as the stories themselves, though full of vigor, fail to breach the pulp-flavored formulae of their genre. 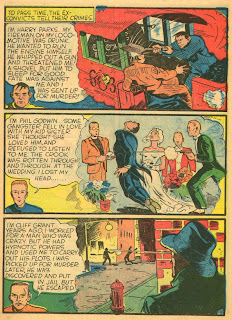 More impressive is this page from the sole "Flint Baker" story Briefer contributed to the first issue of Fiction House's space-opera title, Planet Comics, in early 1940.

In the midst of a genre story, Briefer takes a moment to give three minor characters a moment of back story. This is a device that Jack Cole would use, to greater effect, later in the 1940s.

Few other comic-book creators attempted such cinematic devices this early in the medium's history. Though Briefer later decried his early work as primitive, it engages the reader and still remains worth studying, 70+ years after its first publication.

Briefer's work becomes more cartoony in 1941. Indeed, it seems to have been against Briefer's nature to play it too straight, visually. Such series as "Biff Bannon" for Speed Comics (signed as "Rem Brant") and "The Pirate Prince" for various Lev Gleason titles offer dynamic, loopy cartooning. It often seems slap-dash, with bad and great drawings in the same panels. The pressure of deadlines may account for this inconsistency, but the work remains compelling.

Here are some samples of Briefer's bolder, more cartoony style. The first is from Speed Comics #1, 1939; the next two are from Daredevil Comics #17's "Dickie Dean, Boy Inventor" and "The Pirate Prince" stories. In the latter, the villain bears a remarkable resemblance to Briefer's most popular and long-lived comic book character... 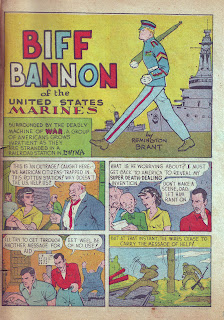 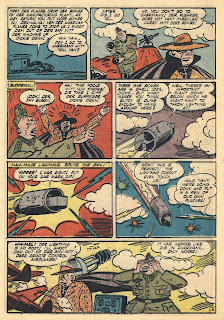 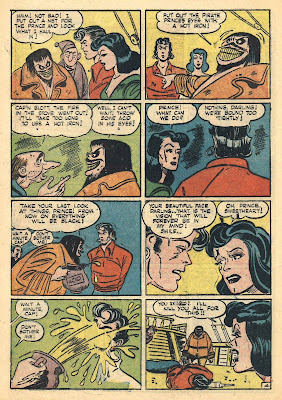 Briefer had begun his re-think of Mary Shelley's Frankenstein, in Prize Comics #7, 1940, in a serious-yet-quirky serial feature. Slowly but surely, the focus became softer, and more humorous.

Three opening pages, from Prizes 11, 45, and 68, show the remarkable about-face that this feature took throughout the 1940s: 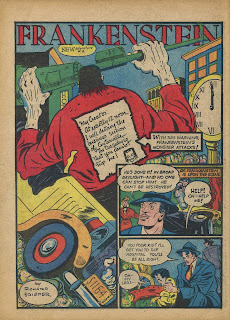 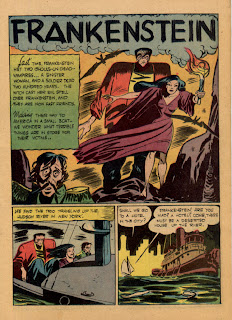 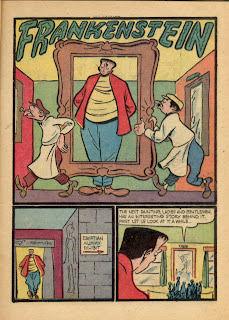 Briefer's drolly macabre "funny Frankenstein" is his most beloved and highly-regarded comic book work. It was his most successful series, too. In the first few post-war years, Briefer was on a roll.

His artwork became increasingly more stylized, less painstaking, and sometimes downright sloppy. From page to page, the quality of Briefer's work is in constant flux. Overall, his thick, bold lines generate an energy and verve that was otherwise sorely absent from the post-war American comic book.

The funny Frankenstein suddenly shut down in 1949. Like many comics publishers, Prize Comics transitioned to romance, Western and crime titles at decade's end. Thus, Briefer was forced to change his approach.

It was a jarring shift for him, and it did not come easily. This page from Prize Comics Western #77 (1949) shows him illustrating serious genre Western scenes with a slapstick, highly stylized touch: 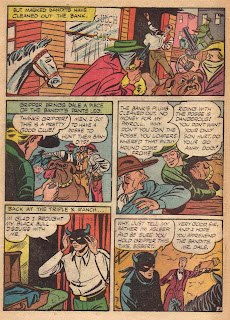 This cartoony fervor also spilled over into his supposedly serious work for Hillman Publications' smarter-than-average crime comics. "The Imperfect Crime!," from the November-December 1949 Crime Detective Comics, stands out like a hammer-smashed thumb amidst more soberly drawn pieces by Bob Powell, Sy Barry and others.

To be fair, the story has humorous trappings, but it frog-marches to a grim conclusion typical of the Hillman crime comics. It's a weird blend of bigfoot and noir, and appears to be one of a kind. (Sorry for the lousy scan of the last page.) 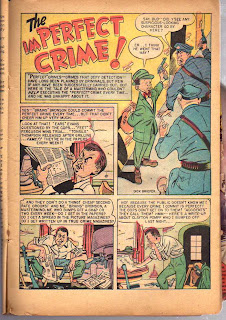 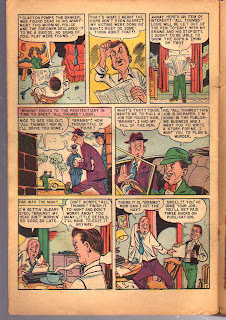 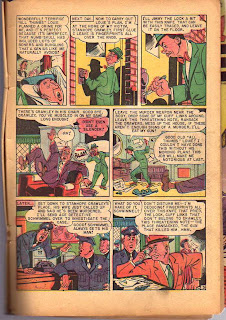 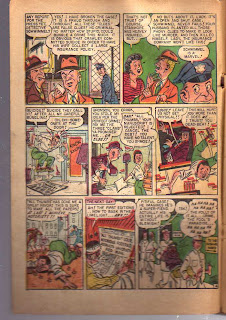 Hillman rapidly matured in the early 1950s. Its stories maintained a higher standard of intelligence than its contemporaries, with the exclusion of E.C.'s crime genre pieces. Artists such as Bernard Krigstein, Bob Powell, Bill Ely, Bill Draut and Ed Moore brought thoughtful, often elegant artwork to these matter-of-fact, allegedly fact-based accounts of crime and punishment.

Briefer apparently realized (or was told) that he had to meet the standard look and feel of the artwork produced by his peers at Hillman. The result was an unprecedented tightening of his style. In startling contrast to his slap-happy work of the late 1940s, Briefer's early '50s crime comics are among the slickest, sharpest work of his career.

There is still much cartooning and caricature in his work. His figures' moods and reactions are flavored with the shorthand of a sketch artist. His rendering becomes gorgeously controlled, and makes this marriage of broad and subtle work. Hillman editor Ed Cronin seems to have encouraged his artists to draw in a contour-line style, reminiscent of book illustrations. This allowed the colorist to contribute an equal share to the overall impact.

The result is stunning, as seen in Bernard Krigstein's work for Hillman. Though the color palettes are simple, they are intelligently chosen, much like Marie Severin's color work for the E.C. titles. They demonstrate what could be achieved, despite the crappy printing, poor paper quality and chaotic color registration that marred comic books in the 1950s.

From the August, 1951 issue of Real Clue Crime Stories, which opens with Krigstein's "Lester of the Bowery," comes one of Dick Briefer's masterworks, the brutal and brilliantly drawn "Boxcars Dennis." 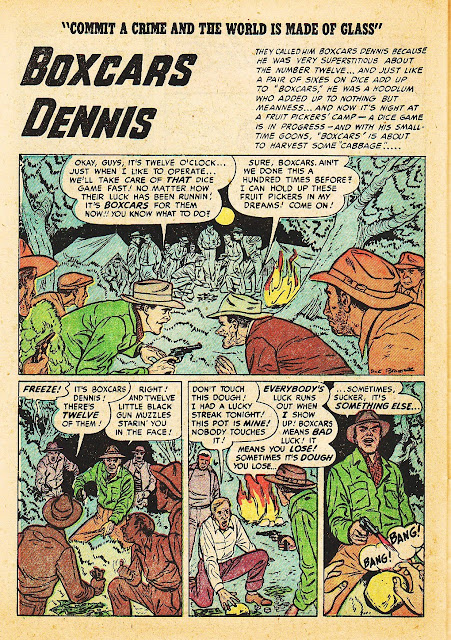 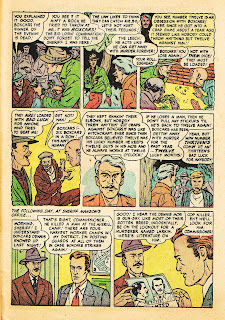 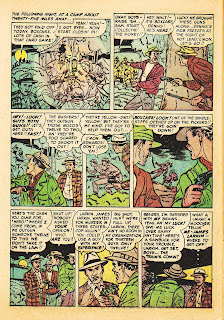 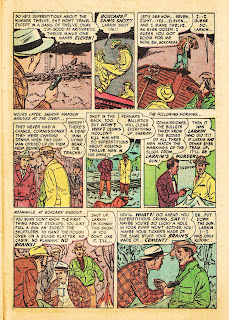 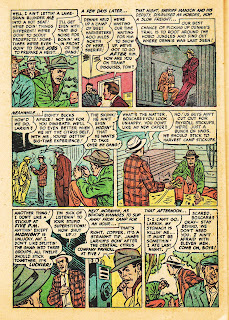 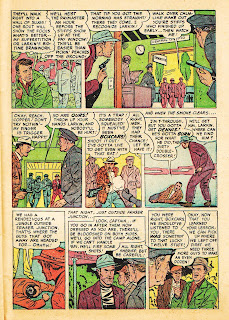 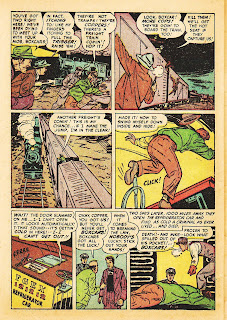 While the writing (probably not Briefer's) succumbs to primitive symbolism too often, despite its fascinating underworld feel, "Boxcars Dennis" impresses with Briefer's sure hand.

The unexpected elegance of his figures' forms, mass and body language gives this grim story an impact beyond the limits of its script. Briefer's contour brush lines are controlled, assured but still full of life. His admixture of caricature and comic book ashcan realism is a remarkable achievement.

Some of Hillman's crime stories were close cousins of the coincidence-laden, O. Henry-inspired "suspenstories" published at E. C. Comics. "The Simple Whistle," from Real Clue Vol. 7, No. 12 (2/53) is a later example of Briefer's impressive, understated comics noir style for the Hillman books.

This story suggests that Briefer had been influenced by Bernard Krigstein's Hillman work.  Both artists, in their time at Hillman, specialized in subtle, thoughtful panel compositions, and strove to give their human figures recognizably lifelike body language. 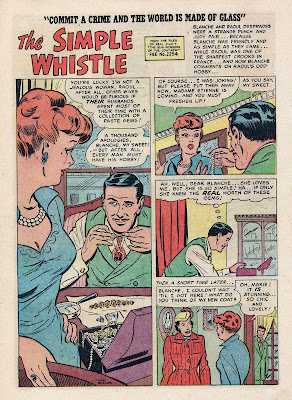 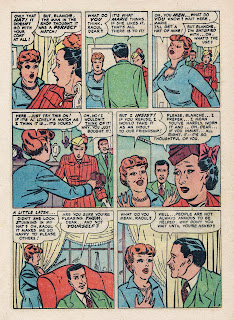 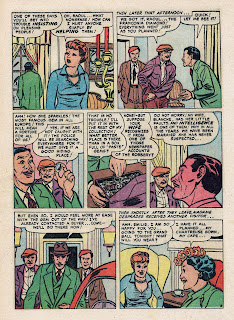 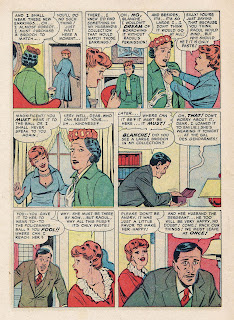 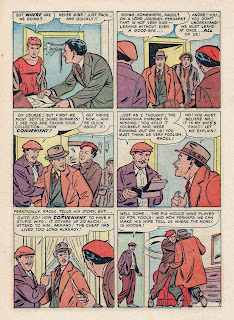 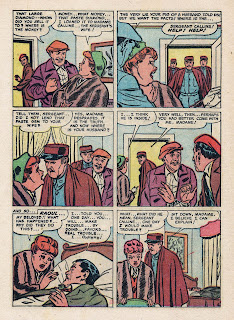 Briefer had matured as an artist by the mid-1950s. Despite the inherent cartoony edge of his drawing, he became more versatile, and more controlled and thoughtful in his choices.

Briefer's past soon came calling. Prize Comics revived Frankenstein, in 1952, for another two-year run. The series' slant attempted a tone of pure horror. Briefer tried to maintain the slick, tight look of his Hillman work. By 1954, his google-eyed bigfoot cartooning sensibility had returned. His artwork of 1954 looked remarkably like his work of 1940, as seen in this cover to issue #28 of Frankenstein: 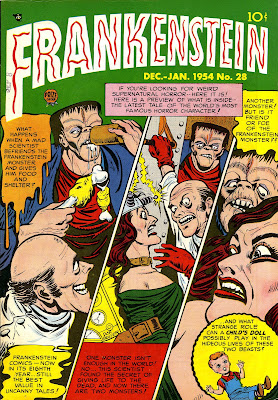 The loss of subtlety in Briefer's post-1953 work suggests that the finesse of "Boxcars Dennis" was not his natural inclination as an artist. This makes his achievements in the Hillman stories that much more impressive.

The dozen or so realistic crime narratives Briefer illustrated for Hillman are little-known, but worthy of more study and rediscovery. There is much more to explore in Dick Briefer's long, varied comic book career. We'll return to his work again on Comic Book Attic.
Posted by Funnybook Attic at 10:36 AM 3 comments: