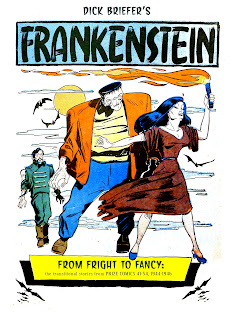 2018 note: Above link is still working, and Frankenstein e-book is still available.

Apologies for the eternity since our last post here... 2012 has been a busy year for myself and for Paul Tumey.

We haven't forgotten our pursuit of the odd and fascinating by-roads of the American comic book.

This 146-page book, in the CBR format (which can also be changed to an RAR file and unzipped) collects 14 consecutive installments of Briefer's monthly FRANKENSTEIN stories for PRIZE COMICS, from issues 41-54 (all lovingly restored for optimal reading pleasure), plus a bonus section of the highly eccentric original material Dick Briefer created for publisher Lev Gleason in the same period.

A second volume, which will collect the balance of the PRIZE stories, is in the works. We'll post as soon as it's good to go!

Briefer's transition, in the monthly FRANKENSTEIN feature, from horror and suspense to humor and satire, has never really been addressed. That's because (a) the original stories have moldered in unaffordable fetish-item 1940s comics and (b) because the stories have never otherwise been collected.

It's hard to get a grasp on the innovation and uniqueness of these 8-page stories in the morass of crap that surrounds their original publication. PRIZE COMICS, Briefer aside, was no prize. Sturgeon's Law functions with horrific efficiency in its pages, and the depressing slog through the other material can lessen the impact of Briefer's achievement.

Following is a condensed version of the introduction for this e-book. Just in case you don't know from Dick Briefer, this oughta help.

Richard Briefer, born in 1915, was in on the ground floor of the American comic book’s Golden Age. He worked steadily in every comics genre for a quarter century, and then moved on to fine art and advertising. In the arc of his comics career  (roughly, 1936 to 1959), he remained an instantly recognizable stylist.

Briefer’s work leaps off the page. Whether finely rendered or outright slapdash, his lines, shapes and figures seethe with energy and a quiet intelligence. Seldom was the artist’s quirkly blend of smarts and style better served than in the later run of his longest-lived comics feature, FRANKENSTEIN. 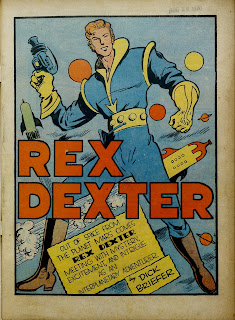 A loose, freewheeling and ever-changing spin on Mary Shelley’s primal horror classic, Briefer’s version of the Frankenstein monster was a novel concept for the comics page. Though outright villains as star characters were part of the wild days of the early comic book (The Claw, from Lev Gleason’s SILVER STREAK and DAREDEVIL titles, being the best-known example), Briefer’s version of the immortal man-made monster, ala the James Whale-directed movies of the 1930s, was no cut-and-dry malcontent.

Malcontents were already familiar to Briefer’s comics world. His REX DEXTER OF MARS feature for Victor Fox’s MYSTERY MEN COMICS gave its hero anti-social tendencies, and gave him an origin story that eerily presages that of Micheal Valentine, the protagonist of Robert Heinlein’s 1961 novel, STRANGER IN A STRANGE LAND. Though no grokking took place, Briefer’s Dexter was a far cry from the stern, one-dimensional heroic figures who crowded the badly-printed comic book pages of the late 1930s and early ‘40s. 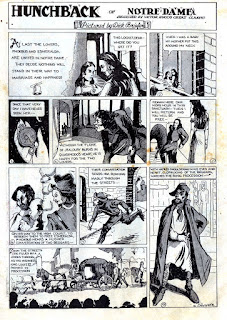 Briefer had, earlier, adapted another anti-hero of literature to the funnies--Victor Hugo’s HUNCHBACK OF NOTRE DAME, which appeared in one of the first all-original comics titles, the excitably-named WOW - WHAT A MAGAZINE! alongside another young comics innovator-to-be, Will Eisner.

Briefer clearly understood and perhaps identified with the anti-hero. His inspiration to translate Shelley’s gothic horror story to the burgeoning comics page was natural-- he may have seen it as a repeat performance of his HUNCHBACK feature, and since the novel was in the public domain, he was free to do with it as he pleased.

But even Briefer couldn’t have foreseen where the feature would take him in the 1940s. It's an example of how "jumping the shark" can result in a positive, striking change.


The FRANKENSTEIN feature’s early development and narrative arcs can be telegraphed through a brief visual tour of the series. 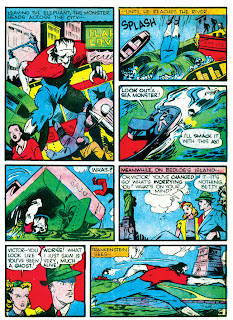 This page, from the series’ debut in PRIZE COMICS 7, is clearly inspired by the Universal horror films. (An earlier page contains outright quotes from the James Whale-directed BRIDE OF FRANKENSTEIN; that page is seen in the e-book.)

Its bold, blunt contours reminds the reader of Basil Wolverton’s similar early work. At this point, Briefer strived to meet the general look and feel of his peers' work. That meant exaggerated action, perspective and composition.


This page's dynamism suggests the contemporary work of Jack Cole (who worked on two series Briefer would soon inherit, DICKIE DEAN, BOY INVENTOR and THE PIRATE PRINCE, both for Lev Gleason.)


Though seemingly crude, Briefer's early work contains a surprising elegance and ambition. He clearly cared about what he was doing. 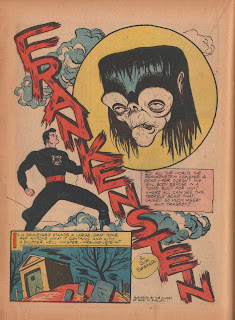 By issue 21, Briefer has a nemesis for the monster in the obsessive-compulsive adventurer Bulldog Denny, who made it his life’s work to destroy the monster who, in his own words, “didn’t ask to be given... a ghastly life of horror and misery.”


The addition of Denny gave the monthly strip a momentum, even as Briefer ping-pongs from idea to idea. In eight-page bursts, Briefer rambles through adventure tropes, genre reversals, and "fusion cuisine" of story types, graced with dynamic poster-style splash pages, such as this one.


The downward diagonal of the logo is striking. The page shows his understanding of the use of white space-- a function that would soon greatly distinguish his ever-changing comics work.


If his FRANKENSTEIN of this period was not earth-shaking, it was far more flavorful than the other features in (NO) PRIZE COMICS. Briefer asserted his personality in his work, and this engagement from author to reader is still strongly felt, seven decades later.

By PRIZE 29, the monster often figures in morality-laden stories as the deus ex machina, as did Will Eisner’s SPIRIT character. Here's the story from that issue, which demonstrates Briefer's desire to do something different in the mainstream comics arena: 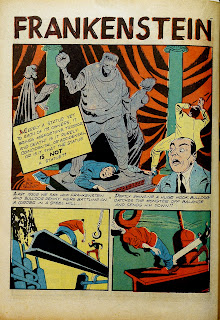 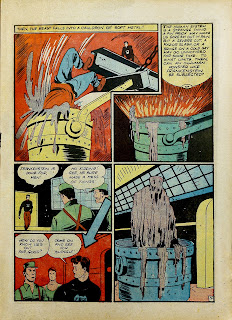 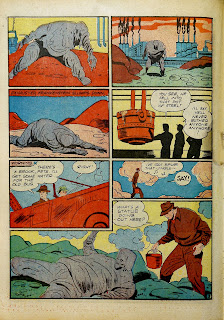 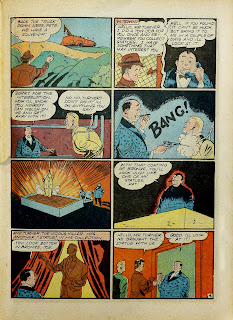 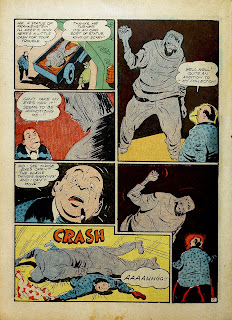 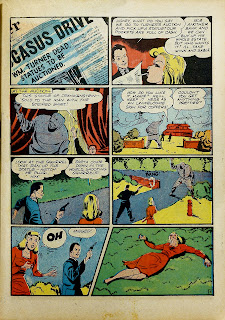 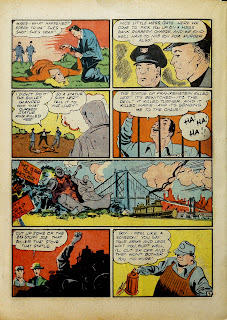 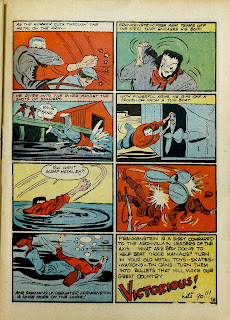 This story is a wild farrago of crime, retributional horror, and police procedural. The first two panels of the third page explore a terrain that is uniquely Briefer's--moody, silent moments where time seems to grind to a halt.

One gets a sense of restlessness in these early episodes. Briefer, aware that he’s onto something good, hasn’t yet figured out what to do with his concept. 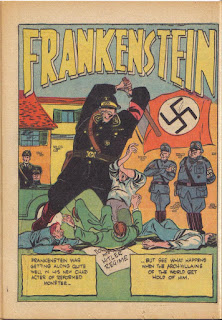 1944 was a pivotal year for the volatile FRANKENSTEIN feature. Briefer had most recently had a scientist attempt to reboot the monster as a gentle, lawful soul. Kidnapped and hypnotized by Nazis, in darkest Germany, the monster then wore Reichstag regalia and did the Fuhrer’s dirty work. This was as extreme a posture as any comic book feature had taken, at the time. Perhaps Briefer thought better of making his anti-hero an outright villain. He quickly reversed the situation. 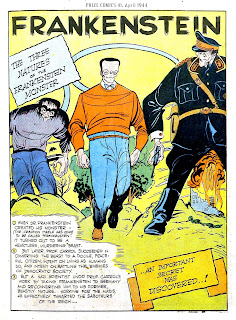 In these darkest moments of the war, a humorous sensibility creeps into the monthly feature. This new e-book picks the story with PRIZE COMICS 41. Briefer’s splash page, seen above (as reproduced in the e-book) recaps recent events, but does little to prepare us for what’s around the corner. 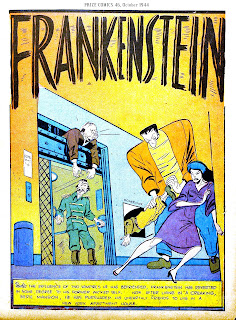 With each successive story of ‘44, Briefer pushes the strip into a realm of macabre humor. The tipping point occurs in PRIZE 46, when Frankenstein and his ghoulish friends, frustrated by wartime housing shortages, gleefully vandalize an exclusive Manhattan apartment complex until its mortal inhabitants flee.

In this story, one sees the ‘ah ha’ moment of the series. Briefer hits on a nervy mix of screwball humor and horror themes. The monsters’ acts of destruction are ingenious and amusing. From this point, all drama goes out the window. Slapstick, satire and droll gallows comedy are the new order.

Briefer seems revitalized by this fresh turn of events. The series suddenly becomes great fun, and its art is endowed with a gruff, palpable vigor. Did this turn confuse longtime fans of the series? Indeed, it heightened the monthly strip's popularity, and caused a solo FRANKENSTEIN comic to launch in late 1945.

In less than one year, the tenor of the series goes from grim topical drama to spoofy, loose-limbed drollery. Few long-running series could survive -- or thrive -- during such a wild osmosis.

FRANKENSTEIN’s stylistic sea-change is seen, story by story, in this new e-book. The radical switch of this series impacted Briefer’s other contemporary work. As a bonus, this e-book contains a suite of four stories that exemplify his mid-1940s work for publisher Lev Gleason.

Gleason's story is discussed in another accompanying essay.

Thanks to Paul Tumey and James Gill for their always-golden input and feedback.

To purchase DICK BRIEFER's FRANKENSTEIN: FROM FRIGHT TO FANCY, please click on the "Buy It Now" button at the top or bottom of this post.
Due to numerous unpaid downloads, the file is password protected. The password will be changed immediately after each new purchase is downloaded. I put a great deal of work and time into this e-book, and its small asking price is a bargain when my time on the project is factored in--so, please, no theft!

Posted by Funnybook Attic at 1:49 PM No comments: 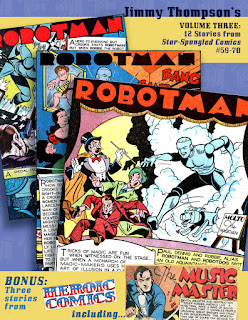 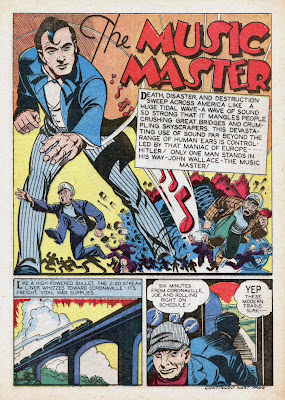 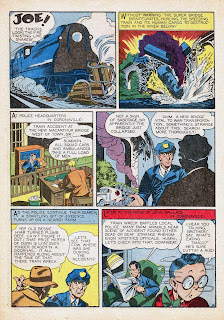 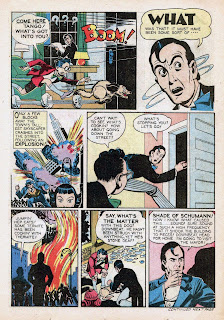 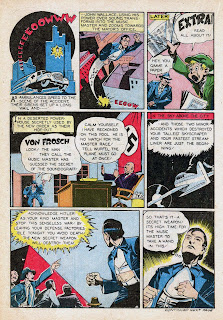 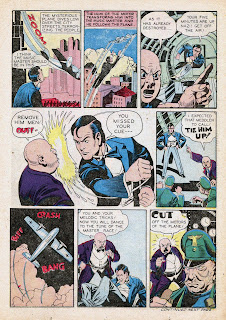 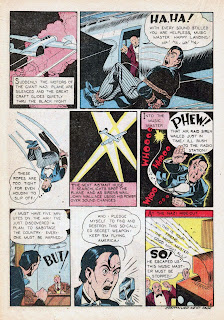 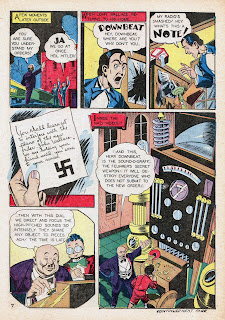 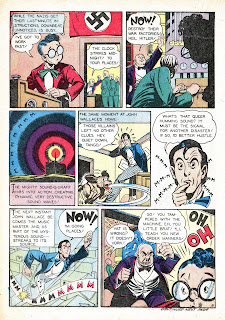 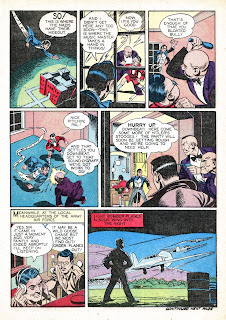 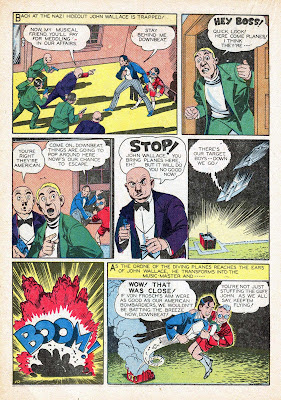