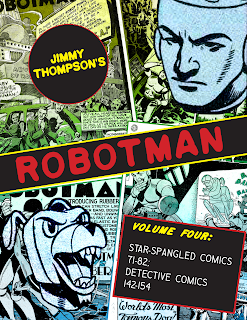 After years of dawdling, we've put in the work and prepared the final Robotman stories of the great Jimmy Thompson in a hefty 220-page e-book. Each of these 25 six-page stories has been cleaned up, color-balanced and looking better than they did in their original 1948-49 printings.

These stories capture the strip's transition from a light-hearted (if formulaic) blend of bigfoot cartooning and super-antics to the feature's early 1949 reboot as a serious science fiction-flavored series. On his last legs, with only months left to his short life, Jimmy Thompson put his all into these stories.

Thompson moved from New York to Missoula, Montana in 1947. There, he lived among the Crow Indians, whom he had long befriended as he studied (and took part in) their culture and way of living. Thompson, an ex-Canadian who had only recently become an American citizen, knew what it was like to be an outsider. This tacitly informs his Robotman work. Thompson did not write these stories. They were written by hack authors who freelanced for National Periodical Publications (familiarly, and now officially, known as DC). 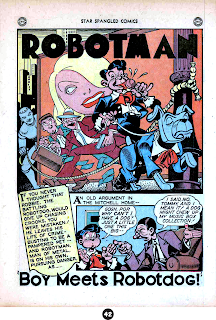 The scripts improve as Robotman becomes a more serious strip. Robbie the Robot-dog, who just vanishes, without explanation or closure, as the series takes a more dramatic attitude. (This splash page, a sample from the e-book, shows just how cartoony the strip could get in 1947.)

The book offers an introductory essay by Eisner Award-winning comics creator and historian Frank M. Young, plus a post-script that surveys what happened to the Robotman character after Thompson's unfortunate demise at age 41.

It's sobering to read these stories and realize that their artist was slowly dying of heart issues as he poured all his skill and effort into their elaborate, TLC-filled pages. Thompson never phones in a single panel, and whether comedy or high melodrama was called for, he delivered the goods as few fellow comic book artists did in the post-war period. 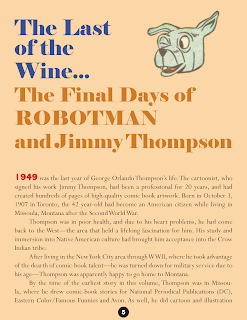 If the scripts of Robotman were any kind of match for the bravura artwork of Jimmy Thompson, the strip would be right up there with Jack Cole's Plastic Man or Dick Briefer's Frankenstein. Despite the pat quality of the stories, each panel is sheer visual delight. Thompson was a skilled visual designer, and he applied this talent to every page of his work--not only these DC stories, but similarly ravishing pages for Timely, Famous Funnies, Avon and other publishers. Thompson's work is sorely deserving of a for-real book collection. We hope that the four e-book collections of his Robotman will suffice for the present.

This double-size fourth and final volume is $6.99 USD. Look below for a PayPal payment link. Upon receiving word of payment, we'll immediately send you a download link to the e-book in PDF format. (The file is 315 MB, so make sure you have proper room on your device to download this puppy!)

Here are some more sample pages from the restored stories. 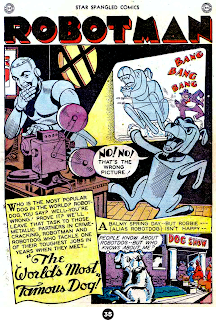 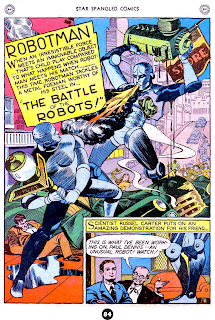 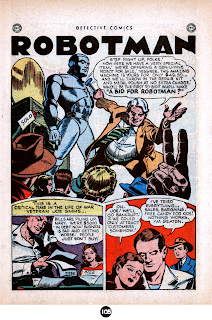